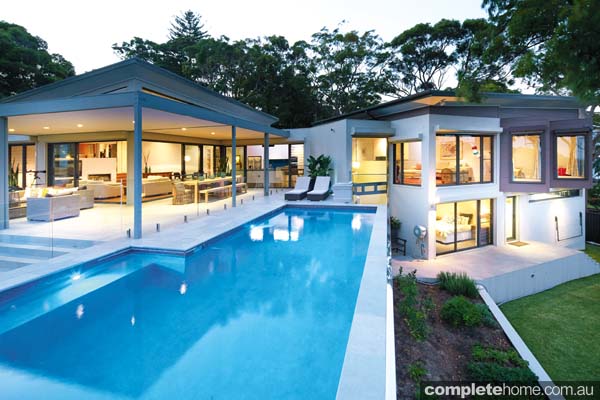 The homeowners are a married couple with two children and a large dog so they wanted their property to have a strong indoor-outdoor connection, a pool, and “plenty of space for the kids to run around”, says homeowner Carrie.

How to tackle a new home build on a sloping escarpment, at the edge of a densely wooded peninsula with a major rock ledge but also facing out toward spectacular beach and ocean views? “The project was conceived to function much like the torso of person,” explains architect Justin. It’s actually quite easy to imagine the shape of this home is a person balancing well on the land, its arms outstretched and enjoying the outlook from high on the hill. “It has its back to the street and its arms stretching out into the landscape,” continues Justin. “The common areas are sheltered back between the two arms, with the kitchen sitting right at the centre of the plan, at the conceptual heart of the scheme.” The treatment of t">