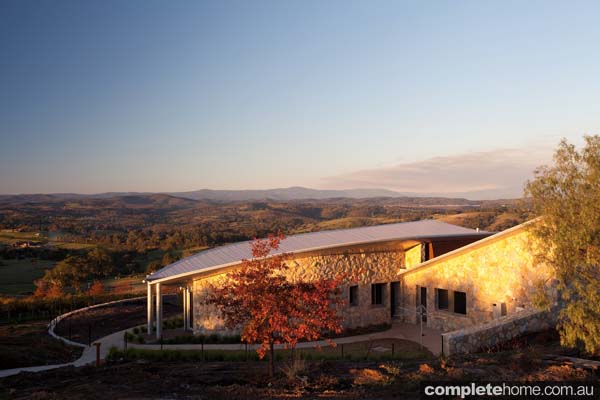 The project was a collaboration between Michael Sheppard from Sheppard & Dwyer Architects, Lisa Grounds from Bliink Interiors, and Anthony Northwood from Eco Edge Homes. “Working with Michael was like having a master class on shapes and angles,” says Lisa. “I really enjoyed this process. They allowed me the freedom to choose the finishes even if they thought I had gone nuts.” For a modern and clean look, a minimalist palette including stone, glass, metal and timber was chosen for the exterior and, as a result, no painting was required. This restrained palette is continued with organic-inspired interiors including neutral walls in Dulux Mount Buller, warm timber finishes and minimal furnishings. In keeping with the landscape, the interiors are decorated with Australian-inspired pieces including a fabulous Bottlebrush rug in the living room.