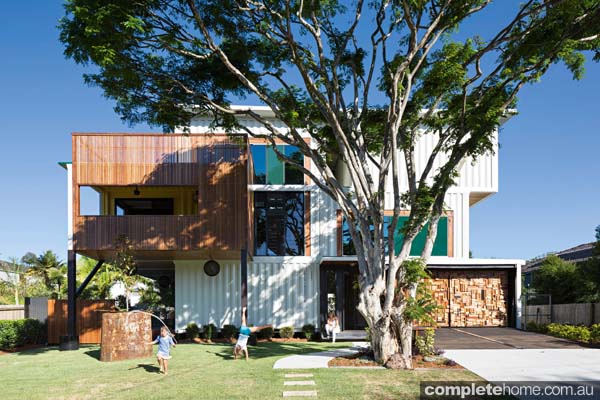 Todd is a builder and the family had spent about a decade building homes, selling them and moving on, but it was time to settle into something a little more permanent. Following the devastating 2011 Brisbane floods, a new house had to be sensitive to the possibility that the waters could rise again. The family needed a bigger home and Diana was adamant on having her own space for an art studio as well. “We basically needed more room as a family,” says Todd. “We wanted another living area so that we could have separate entertainment away from the kids … and we needed to do it all on a shoestring budget.”

After looking at the concept of a shipping container as a cheap backyard studio idea for artist Diana, Todd got the “crazy notion of building an entire house out of them, and so the process began. Once we decided to use shipping containers, it got bigger than our initial vision,” says Diana. “The most important factor was to create more space for us but as the project evolved, the design elements and the look of the house became a big priority.”