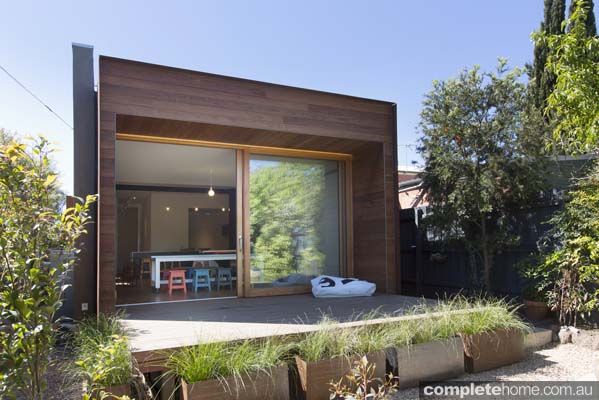 You can tell by the entrance of this home, on the corner of a main street in Ascot Vale, Victoria, that it has a rich history. In a past life this building was a lolly store with an early 20th-century Victorian facade and, more recently, a barber shop. While the owners wanted to retain some of the original charm of the residence, certain features needed to be modernised to make it more liveable for the young family.

At first glance some on-trend adaptations stand out, with timbers and dark-grey paint working together to freshen the exterior. For architect Jeremy McLeod, however, the real challenges lay inside. “Because of the house’s former life as a barber shop, the circulation was inefficient and clumsy, with its occupants needing to travel through the master bedroom to reach the only bathroom,” recalls Jeremy. With the clients in need of an “elegant plan” to provide efficient flow between the rooms, complete re-planning was essential. Specific design requests included the addition of a bedroom and ensuite to the existing footprint. “They needed the house to work">